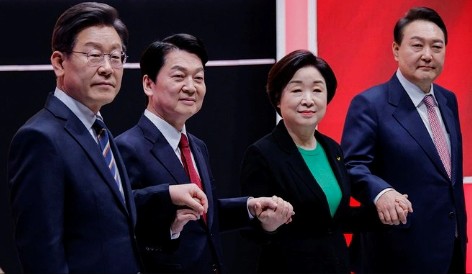 As the South Korean constitution restricts the incumbent presidents to a single five-year term, not allowing him/her to contest elections again, about 4.4 crore South Korean nationals are casting their votes today on Wednesday to elect their new president.

The incumbent president Moon Jae-in from the ruling Democratic Party is not eligible to run for a second term.

South Korea has a total of 5.3 Crore population. About 1.6 crores voters out of 4.4 crores have already casted their votes in a pre-poling conducted last week.

About 1.61 lakhs South Korean citizens staying abroad in countries like India and elsewhere exercised their voting rights at the specially made polling booths at the diplomatic missions in their respective countries.

Out of a dozen candidates trying their luck, the Presidential candidates Lee Jae-myung from Democratic Party, Ahn Cheol-soo, People Party; Sim Sang-jung, Justice Party and Yoon Suk-yeol from People Power Party are being said to be the frontrunners in the race for the new President of the Republic of Korea.

Candidates from the ruling Democratic Party and major opposition parties have been running neck and neck for weeks in a campaign defined by scandals and a sharper focus on candidates’ personal flaws than on national issues.